As we don’t like taking the motorhome into big towns and cities when we can avoid it we opted for a taxi for our trip into Veliko Tarnovo. Last of the big spenders we are not at a cost of £4 each way it seemed easier than finding a safe place to park, so we went for a proper tourist day out and didn’t even take our own sandwiches!

the River Yantra runs through and around town

Until 1877 Veliko Tarnovo was part of the Ottom Empire, it was liberated by the Russians and then was declared the capital of the Principality of Bulgaria, so that’s its major claim to fame. Today it has taken on the mantle of university town and very popular tourist destination, not hard to see why as it has a lovely mix of history, modern shops and a big cafe culture with outdoor eating the at every turn. The oldest parts of the city are built on three hills which look down to the River Yantra weaving between them. On top of the highest hill, Tsarevets, sits a medieval fortress, built in the 12th century, which is surrounded on three sides by the river. A fairly un-sturdy looking bridge crosses the gorge to enter the fortress with the river very far below. We walked as far as the bridge, saw the bus loads of tourists all heading the same way and gave it a miss. Only so many castles we are going to see and we are saving ourselves for the biggy in Transylvania :).

Back in town and we took to some of the backstreets, mostly cobbled and called the Craft Streets, meaning really they are real tourist traps. One or two sold some interesting masks and wall hangings and there was an artisan baker but the majority sold the same pottery, jewellery and general souvenir stuff that you could find anywhere. We found a couple of giant chairs positioned for photos – all good except they are down an alley with pretty much no view of anything, we found them by accident but took the tourist snaps as you do anyway. 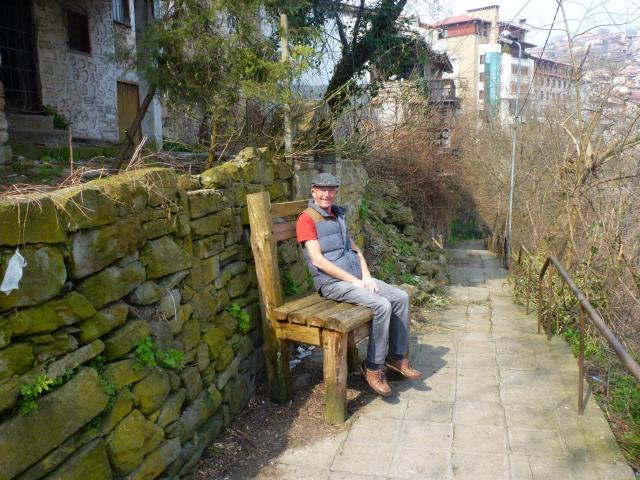 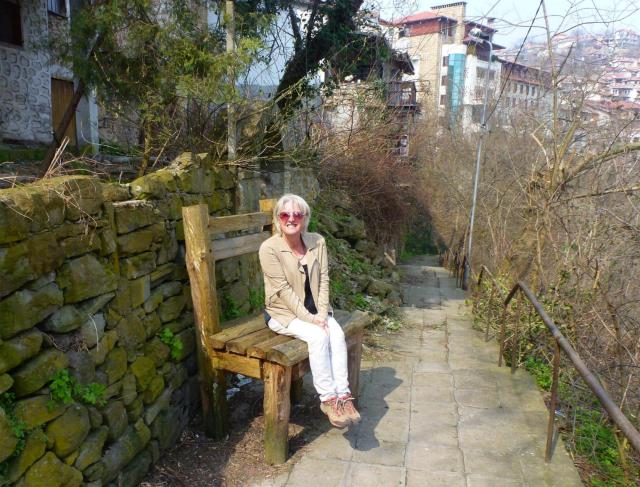 Not really sure what we expected the city to be but it was a surprise in a lot of ways. We thought it would be poor and run down, and a bit colourless, that propaganda of grey concrete Eastern Europe that it’s hard to forget. It really wasn’t any of the things we thought it would be. The only big buildings were those of the university and art galleries, with the exception of one colossal concrete hotel but one we can overlook. The colourful houses are built up into the hills around the city, balconies defy gravity or in some cases don’t – there are some big gaps where once stood a veranda or two. Plenty of very good shops including a good few designer outlets where prices made our eyes water – even though they were in LEV. The university students resemble those of any city, all the latest fashions and not a one seem without a latest version mobile phone glued to their ears. Pretty much every cafe or restaurant that faces the river has a balcony which faces down to the river and the landmark city monument,  four gigantic statues of the Assens Tsars, built in 1985 to commemorate the 800th anniversary of the town being declared the capital – in return for the walk down for a closer look are fabulous views back up over the town perched on the side of the hills.

Veliko Tarnovo from the monument to the Assens

the monument of the Assens

Being a little heavy of pocket here we treated ourselves out to lunch, the campsite owners had recommended a little restaurant in the town. First problem of course is finding said restaurant when the name has been written down in Cyrillic, it’s way harder than you imagine to find a sign that matches the squiggles on a pieces of paper. Well worth the effort, the food was wonderful and the decor something slightly over the top and as un-Bulgarian as anything we had seen. Two main courses, a basket of garlic bread and drinks set us back just under £7 – we eat out infrequently and when we do usually end up with toasted sandwiches, so this was a massive treat in that the food was not just cheap it was delicious.

Whilst we normally avoid cities as much as possible this one was worth the visit. Plenty to do and for us to spend five hours exploring in a built up area is fairly unheard of. When we had enough we decided to get another taxi, slight panic in that we could not remember the name of the village we were staying in 😦 .We were sure the taxi drivers would know where we meant – nope, they just looked blank ! Rather embarrassing and lucky for us we were just up the road from the Tourist Information and after a quick chat between themselves they worked out where we were staying, you have no idea how sad it makes you look when you can’t remember where you are staying and you have to ask someone 🙂

The last place we wanted to visit before we leave the area was  Arbanassi which is fairly near by and has a famous Nativity Church. Originally built during the 15th century its nothing much to look at from the outside, inside is a different matter. Every inch of the four vaulted interiors are covered in frescoes painted between 1597 and 1649. We tried the door and it was locked but a local Baba appeared from nowhere with a massive key and let us in. She did tell us no photos but I will shamefully admit to taking a couple with out using a flash, just couldn’t resist having a memento of such a beautiful place. The village itself was very upmarket, more Mercedes than Lada and an astonishing number of hotels and restaurants, all of which very open and doing a brisk trade. Most of the tourists appeared to be local, lots of black leather jackets and very, very chunky jewellery – and that was just the men! 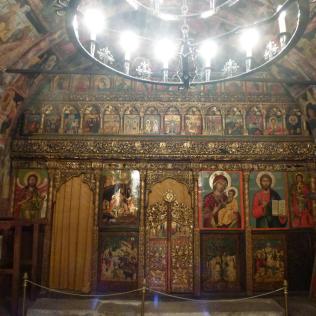 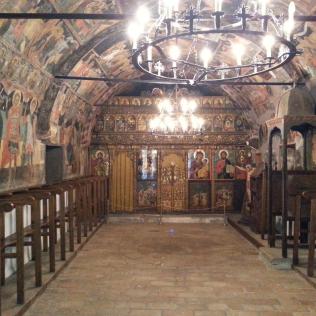 Weather update for the week – its been spring with a hint of summer. Bulgaria seems to go from winter to summer in a week. The cold winds have all but gone and just left the sunshine. The Bulgarians have a tradition where they give each other woven yarn red and white bracelets, called Martenitsa, and worn from Baba Marta Day (March 1st) until they see the first stork returning or the first buds on a tree, which signifies spring has arrived. Once either of these have been seen the bracelets are removed and tied to a tree with buds, its a lovely little tradition that seems to be followed by young and old. We have seen several storks now and many trees are in bud, hence the abundance of woven bracelets in trees such as this one

Tomorrow we were planning to move on but the forecast is for 70 degrees, then rain for the following few days. Quick change of plan and we have decided to stay an extra day here at Camping Veliko Tarnovo and enjoy a day of sitting doing not too much in the sun and a wander around the village. It’s an absolutely fabulous campsite, not sure they come much better than this anywhere in the world. Added to that the village is just wonderful; old women sit on the edge of the road snapping twigs and putting them in baskets (they have been there for two days and we have no idea why they are doing it); the local hard-wear shop sells anything you can think of from socks to soil – its like Aladdin’s Cave and the grocers is like a time capsule from 1930, its our idea of shopping bliss.  So we are going to stay tomorrow and enjoy Dragizhevo and then head off on Friday towards Transylvania in search of vampires.