We dragged ourselves away from the marina with the promise of another of the world’s great bridges. This time the Great Belt Bridge, linking Fyn to Zealand, really two bridges linked in the middle – the box girder bridge is 4 miles long, followed by the suspension bridge which is just over 5 miles.

It is one of the most incredible structures we have been on, which is just as well as the toll was a wee bit more than planned. We are under the 6 metres for the cheapest class, but the lady spotted the bikes on the back which pushed us over and another £12 so £35, still worth it though if you are bridge addicts like us. 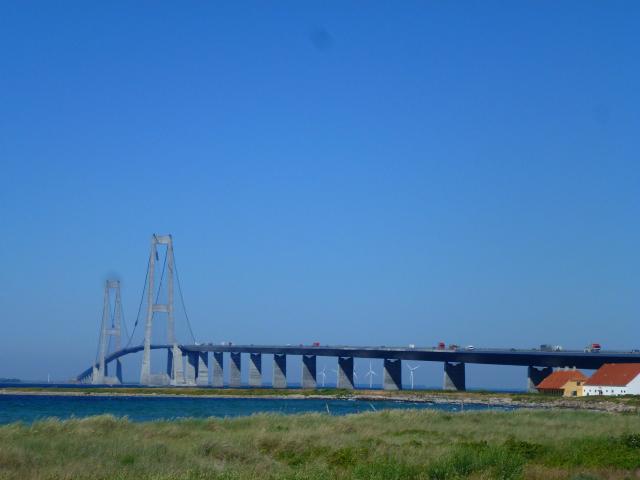 We pulled off at yet another marina and were really impressed as they did meals on wheels – a delicious pasta and a tasty curry were both delivered – gratis :). Or maybe it was the very kind, Tracy and Dave from Deal (small world syndrome – Tracy knows my god-daughter). A very entertaining evening with them and Thomas and Lisa from Sweden, putting the world gently to rights and swapping tales of places been and seen.

Much as we thought of staying to see if more leftovers were coming our way we moved on to Copenhagen. Not on our list to see, but there is a campsite in the city centre, plus we needed to drive through the city to get to Sweden so why not. 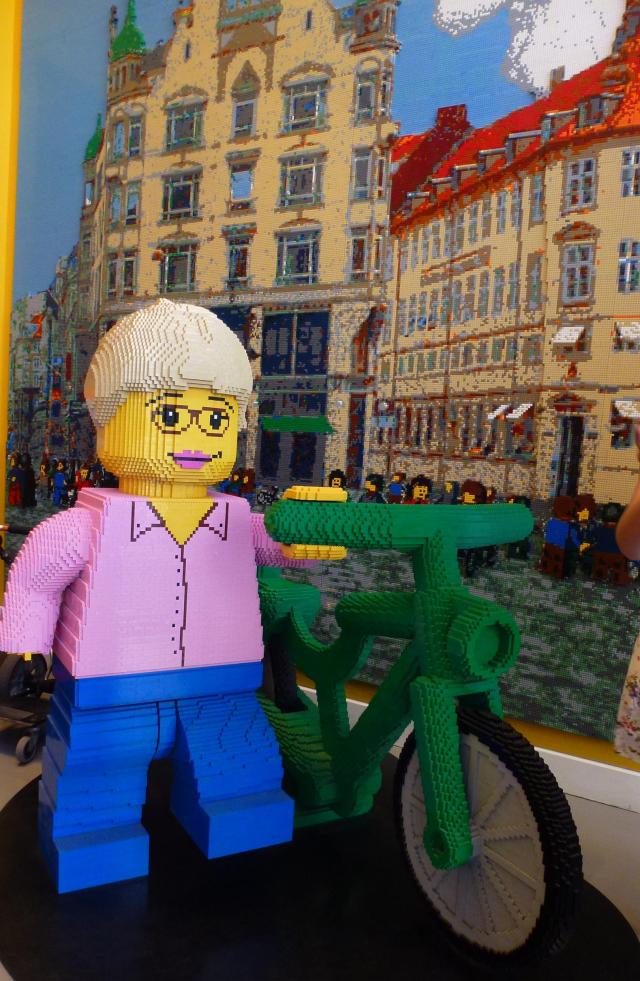 A city of giant Lego

We started our tour around the city with the river bus – excited like two giddy kippers we were. Running from side to side taking photos, whilst the backs of my legs turned redder by the second, its been baking weather all week. Just £2.50 each for the complete river bus tour up and down the city which lasted just over an hour. 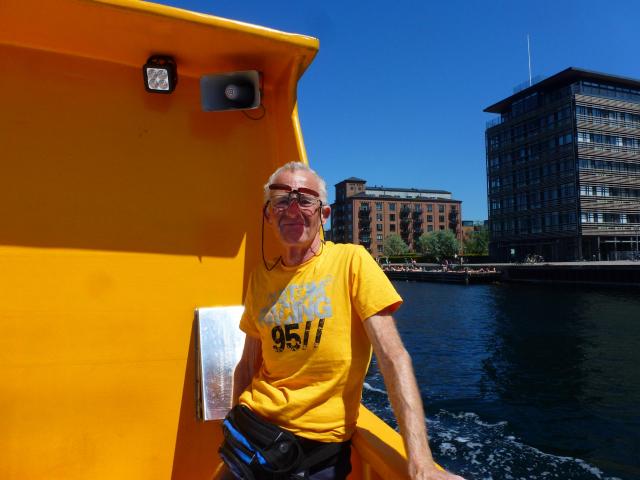 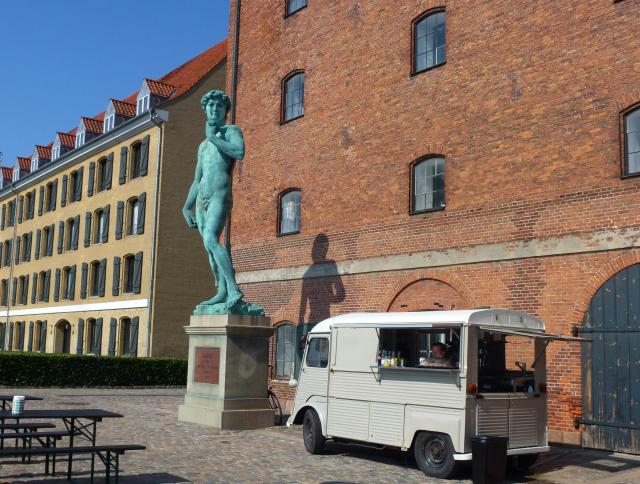 The next day we headed for the old town and time to tick off some of the must see and do. The Little Mermaid, obviously, along with a couple of hundred cruise boat tours. I will join with the general consensus of every person there “it’s loads smaller than you think it will be”.  The brave and the good climb down onto the rocks to get a photo, if not any photo will include the “selfie sticks” of a couple of hundred tourists. 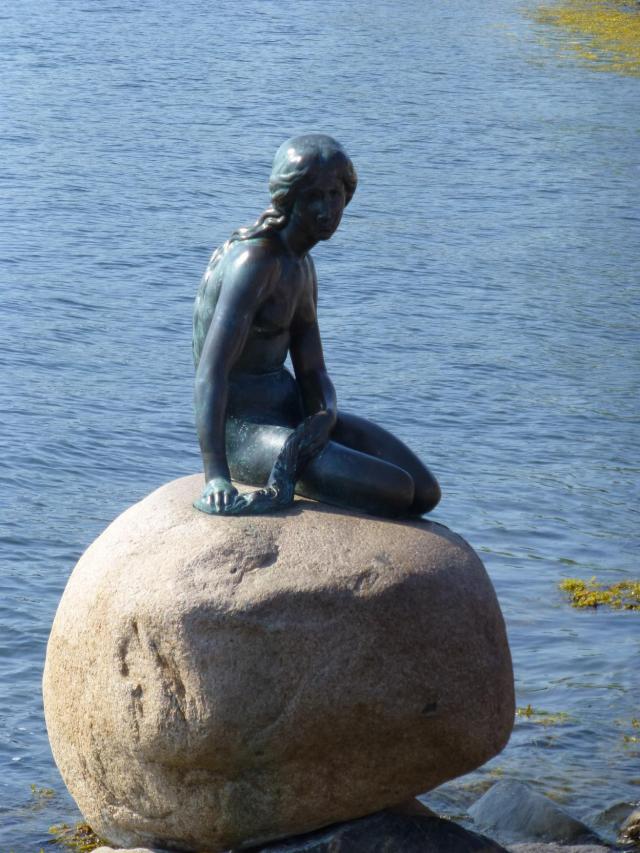 She needs no tag – beautiful

The main must do had to be having a Carlsberg on Nyhaven in the old town. Nyhaven is the iconic Danish view, the old harbour buildings are painted in Tobermory colours, the canal runs through the centre and is lined with stunning house-boats and the quays are lined with restaurants and bars. It is without a doubt a massive tourist trap but it’s none the worse for it, postcard pretty and the place to catch the massive canal ferries that take from 120+ on trips around the city. 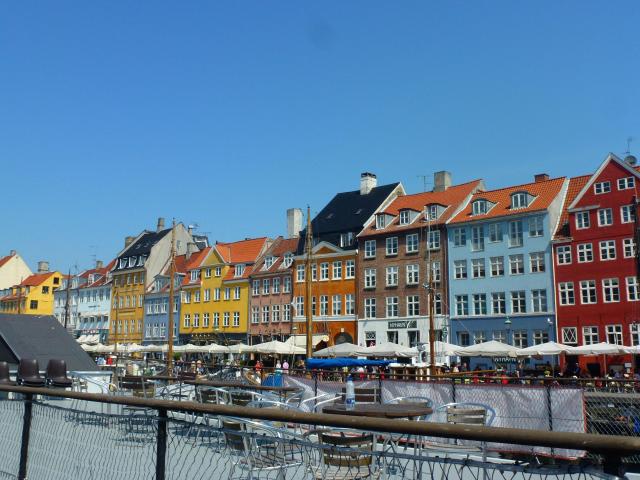 For us, one of the camera shutter moments of life when nothing could be more perfect was our beer at Nyhavn- the scenery, the sunshine, the cold beer – ok the price of £4 for a half pint maybe could have been improved upon but it was ‘probably the best beer in the world’ that we will have 🙂 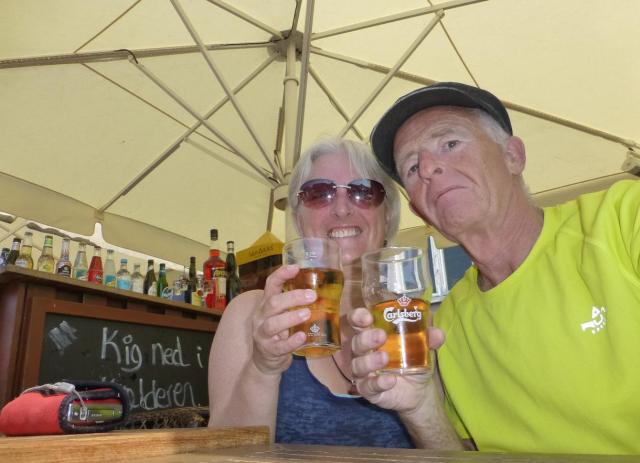 There must be enough to see and do to spend a week in Copenhagen and we only briefly touched the on most of it. The Royal Palaces, the churches, the canals and rivers all deserve a few days. We both loved Frederiks church, known as the Marble church it’s rococo architecture forms the focal point of the Frederikstadn district. Inside hundreds of people were sat in the pews in silence, looking upwards to the 31 metres span domed ceiling, the largest dome in Scandinavia and possibly one of the most beautifully painted. 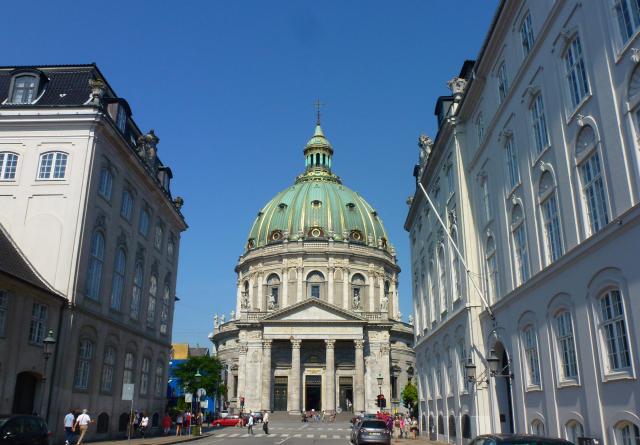 We did have lunch in the old city, our top tip if you are going to try the Famous Royal Smushi cafe as we did – eat well before you go! The tiniest, one forkful of ‘smushi’ each and one bottle of coke between us was £14. Tasty but didn’t touch the sides – it’s not a cheap city even if it is one of the most beautiful.

Our last stop was the Amalienborg, winter home of the Danish Royal family. Not just one but four identical palaces facing each other around a courtyard. Not sure how the Royal’s go about flitting from one to the other with a million tourists wandering through, not gated off like most palaces you could wander right up to the front doors. Each palace was guarded by a lone sentry, a hot and unhappy looking four fellas who suffered many. many photos being taken – mine included. 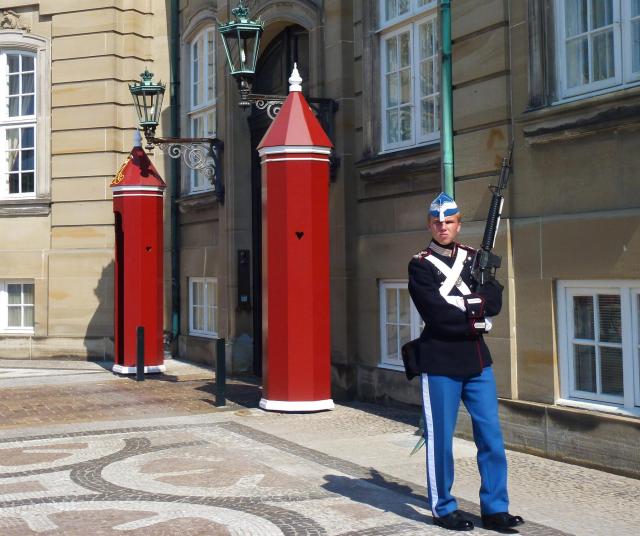 With the city temperature gauges showing 34 / 94 degrees it was too hot to do much more and we gave in by mid afternoon. Back at camp we met up with some fellow travellers -known to us as the Woolly Wanderers. Shaun and Jude, plus three adorable poodles have been traveling around Europe for a year too and we have followed their blog weekly, brilliant to meet up at last and discuss the many highs of a year out in a motorhome, including hearing about their exploits travelling through Russia a few months ago. A great evening to finish up wonderful couple of weeks in Denmark – next stop Sweden. 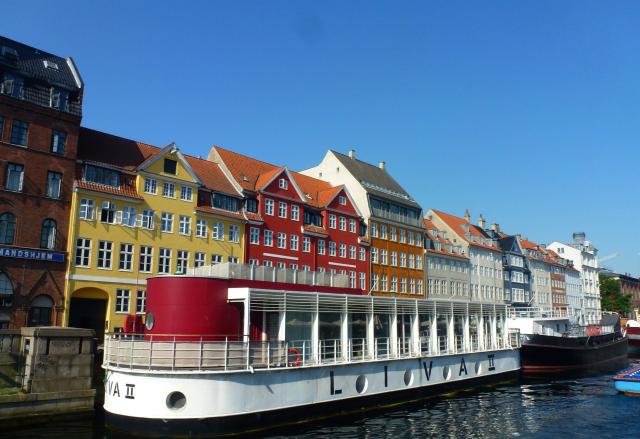 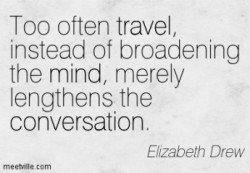